This is in relation to How does this Anamorphic illusion work?

I noticed there were several votes to close for an "unclear question" and when I voted, I voted to migrate to PhysicsSE. However when I submitted my close vote, it attached my name to "unclear question" and not that it is a better fit within PhysicsSE (see the comment which was posted at exactly the moment I submitted my close-vote). This tipped the balance of votes. How can that happen?

Who voted for what is not shown whilst voting is underway, however the number of votes for what is shown. Below is an example 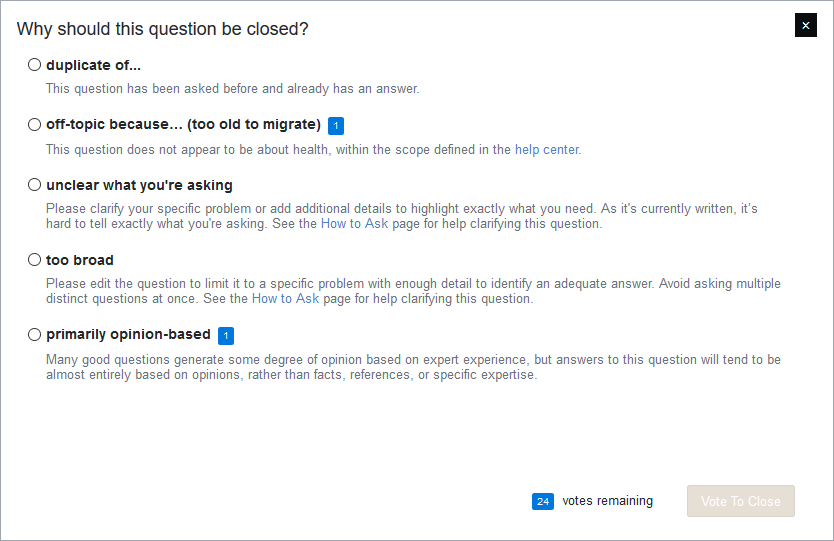 When voting is closed and been deemmed a majority, the names of those who voted for that majority vote is shown with the close reason. Below is what is on the Anamorphic Illusion question

In response to @StevenJeuris, I am not against my name being attributed to a majority close reason when I voted for it, but I didn't vote to close for "unclear question". I voted for migration.

When a question is closed, it does not show who voted for what. It simply shows one close reason (the majority, or the one decided by a moderator) attributed to all people that voted to close. The specific votes are not listed.

In case you would argue this should be done differently, you can do so on the main Meta site: Please anonymize rather than incorrectly attribute close reasons to users

Not the answer you're looking for? Browse other questions tagged bug close-reasons vote-to-close .