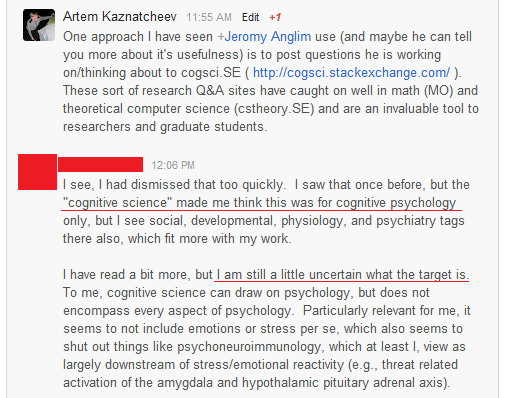 11
What should we change the name of our site to, if anything?
17
Whither a more inclusive site name?
12
Cognitive Sciences 2012-2016: Community Review
14
Cognitive Science Reboot 2017: Changing the Name
7
What welcome message should we have?
6
Name change of CogSci - what about Psychology?
7
Vote for a new site name!
6
Refining scope and new site name
7
How will branding affect the perceived inclusiveness of cognitive science and psychology?
1
What is the current status for the site name change proposal?
See more linked questions

17
Whither a more inclusive site name?
7
What welcome message should we have?
4
Should we change the site name to Mind?
12
Rebooting Cognitive Sciences: a Suggested Approach
6
Refining scope and new site name
4
What are the rules for reference requests?
6
Name change of CogSci - what about Psychology?
14
Cognitive Science Reboot 2017: Changing the Name
5
New title, new phrasing needed for 'not framed in cognitive sciences'