Getting MathJax support: Understanding the trade-off between mathjax and page load times

For some time there has been a thread on meta discussing the desire for MathJax support on Cogsci.se in order to support the display of mathematical equations in questions and answers.

Recently I received the following post from Rebecca from StackExchange:

Enabling MathJax supports means that on every single page on this site, the MathJax scripts will be included, and they are not small. Due to this, we want to see that MathJax is being used significantly on the site - otherwise, we are just needlessly slowing down the user experience on the site.

In the list of questions included here, I see stuff that would use MathJax in only a couple of the posts. Poking around the rest of the site, I'm seeing it used extremely minimally.

Given the extremely small use I see on the site in the current questions, I'm not sure I see the benefit in enabling MathJax.

I can appreciate that:

That said I think a few points should be mentioned

Equation support is important to this site

Reflections on load times with MathJax

Thus, I am aware that there are trade-offs, but I'm hoping to have a dialogue both with users of this site and StackExchange about whether all things considered the trade-offs justify inclusion or not of Mathjax.

This is a great question.

I totally agree with the chicken-and-the-egg problem. I know that this site has no MathJax support and so I don't even try to write equations, because it is so painful to try to write math without MathJax when you are used to having it (as on cstheory.SE, cs.SE, math.SE, stats.SE, scicomp.SE... etc etc etc). I also avoid writing certaion kinds of questions on this site, because I don't know how to formulate them without math. I feel others who have technical questions, might feel the same way. Without these technical questions being asked (something we desperately need) we are not generating the need for MathJax in answers.

I am more than willing to sacrifice a little bit on load times for the potential benefit of more technical activity on this website. Further, I agree that this is an essential differentiating feature for a scientific site that wants to be taken seriously.

I have to say, Rebecca confuses me greatly:

Due to this, we want to see that MathJax is being used significantly on the site - otherwise, we are just needlessly slowing down the user experience on the site

...Uhhh, we don't have MathJax, so of course it's not being used!

I'd like to ask the Stack Exchange team to reverse their position: give us MathJax support now, then if we haven't used it enough, then discuss taking it away. Otherwise how are we to know if "MathJax is being used significantly on the site"?

Also I fundamentally disagree with their assertion that the MathJax scripts [...] are not small. [...] we are just needlessly slowing down the user experience on the site." In my testing the MathJax scripts do not cause any human noticeable differences in load times.

Here is what Chrome's inspector shows for the loading times on one of our questions: 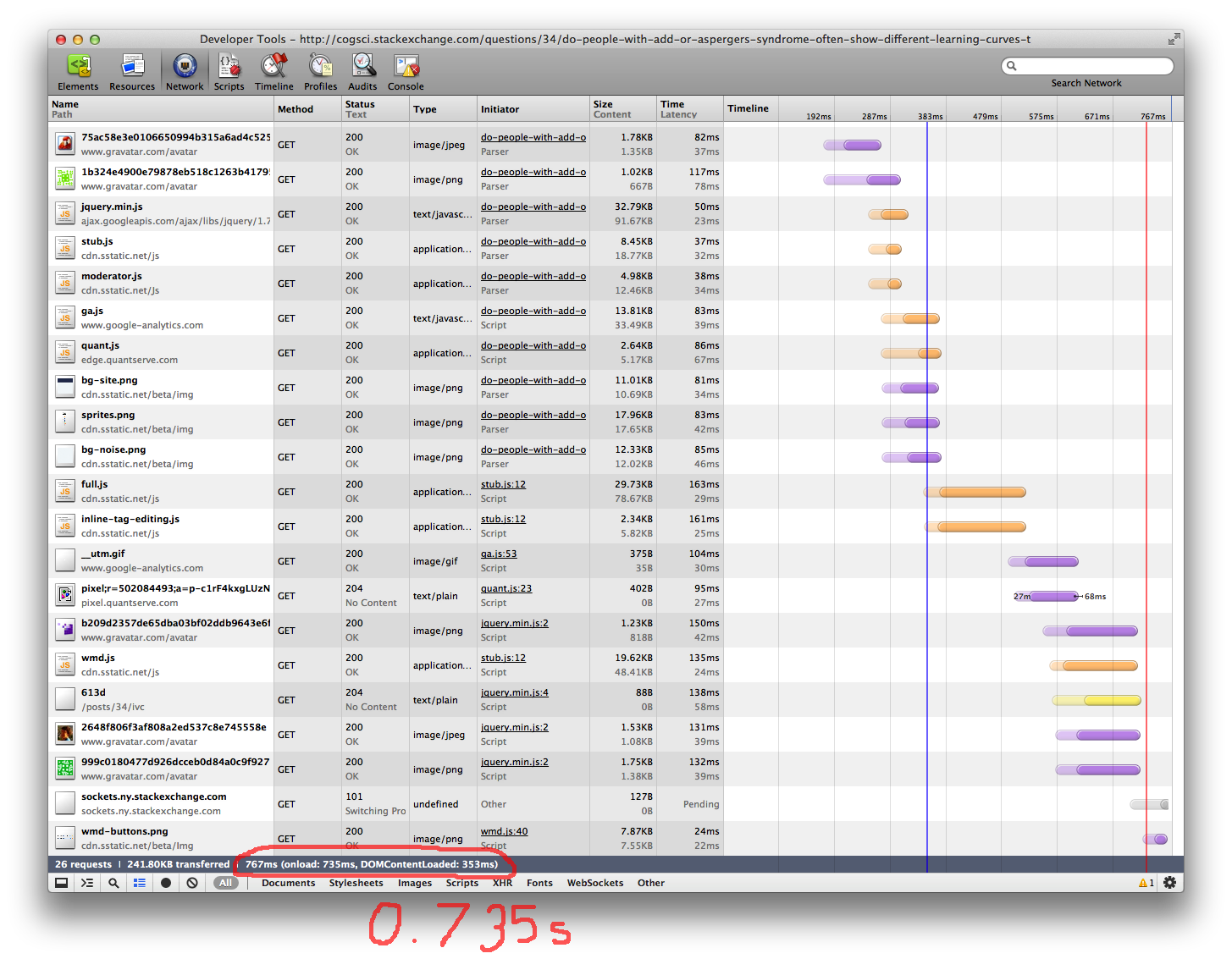 Total load time for that question on our site was 767 milliseconds.

Here is what Chrome's inspector shows for the loading times on Cross Validated: 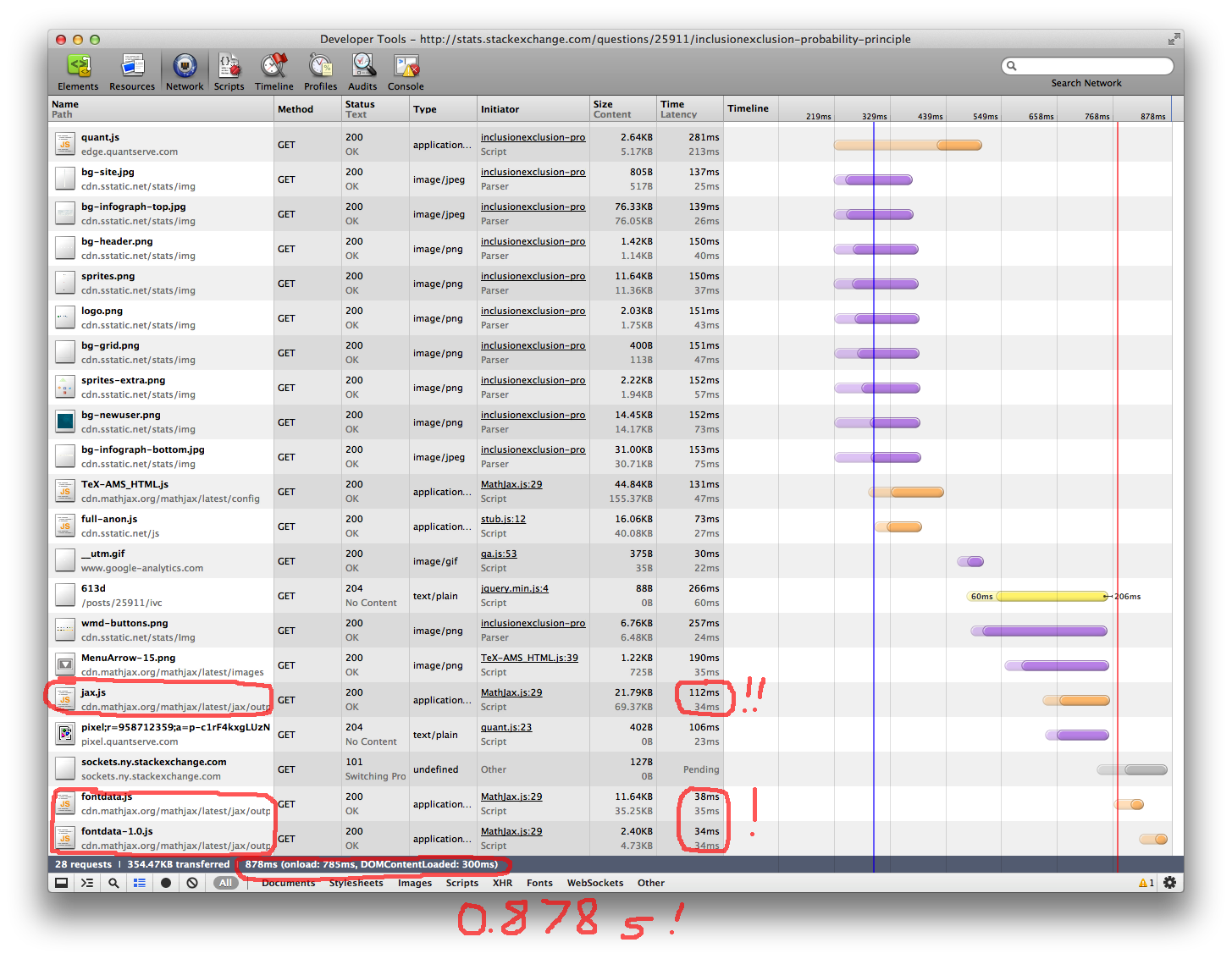 That's 878 milliseconds. Less than a second to load the page. Only ~120 milliseconds longer than our site!!! And this is from a residential cable connection (Where I am only getting 30% of the speed I am paying for, but that's another matter):

OK. So according to SpeedTest.net my connection is faster than 87% of others in the US. However most other users of this site will be using connections similar to mine. Many ideal users will be students or professors at a university, and will in fact get much better internet speeds than I do.

I see no validity to the claim that MathJax support will cause too much load on our site.

7
When will we get latex mathematics support (i.e., MathJax)?
11
Why aren't we asking more questions?

7
When will we get latex mathematics support (i.e., MathJax)?
0
Can we drop Psychiatry?
12
"Flag" and "Recommend Deletion" options for answers that are merely unscientific opinions
6
A new CogSci.SE Facebook page
5
How to reduce self-help questions?